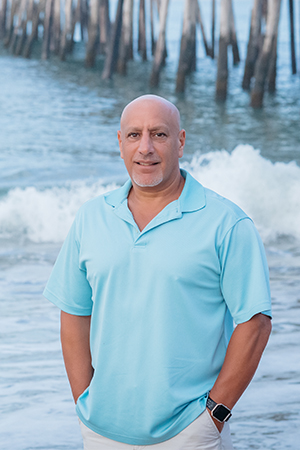 In 2011, Mike Meola began his real estate career as a Weichert Real Estate agent in New Jersey, after finishing a 30-year law enforcement career. While in his native state, he worked as a Detective with the Elizabeth, NJ Police Department, and then went on to work as a State Investigator with the New Jersey Office of the Attorney General, before joining Weichert.

After being a yearly vacationer in the Outer Banks since 1994, Mike and his wife Paula finally realized the dream of owning a home in the OBX in 2013. They made it their forever home in 2015.

Being a full-time, year-round resident of Corolla since 2015 has given Mike the time to explore and get to know all of the areas of Corolla, including the 4 X 4 communities of Swan Beach, North Swan Beach, and Carova. Working in the security and hospitality fields during that time, Mike became intimately involved with tourism and owning a second home. Whether that home is for personal use only, or a rental property, Mike can help you navigate through both buying and selling in the Outer Banks.

Mike has sand in his soul, and is a beach bum at heart. He loves spending time enjoying the beaches and tranquil sound waters of the entire OBX with his family and friends. Mike and Paula are also huge dog lovers, and have a rescue female pitbull. She was found on the side of a highway on July 4, 2015 in San Antonio, Texas, and she had recently had a litter. Independence was our name for her, “Indee” for short, and she is now a beach bum, too.