We were busy at work this morning...clacking away on our keyboards and answering phones and making decisions and whatever else we do every day at work when suddenly BOOM BOOM! Sonic boom? Bombing Range? It was loud enough and unusual enough that we all stopped and looked at each other. Admitedly we are a little skittish here since we have had an earthquake, a hurricane, mandatory evacuation, tornado warnings, flooding and now an onslaught of mosquitos (due to Hurricane Irene) in the space of two weeks. So far we have not heard what caused the very loud noises today but our co-worker Durinda sent me some information about "Seneca Guns" that we found very interesting and we want to share. Seneca Guns (from the United States CoastGuard website)

The term "Seneca guns" is just a name, not an explanation. It does not tell us anything about what causes these noises and shakings. The name originated in a short story that James Fennimore Cooper wrote during the 1800's. The name refers to booms that have been heard on the shores of Lake Seneca and Lake Cayuga in New York State. The name has been applied to similar noises along the coasts of North Carolina, South Carolina, and Virginia. Similar booms are called Barisol guns in coastal India. These phenomena have also occurred in three widely separated places around the world. That's about all we know about the Seneca guns.

The thing that comes closest to matching all of the observations is sonic booms from military aircraft. The article from https://www.farshores.org/ summarizes reports of Seneca guns from coastal South Carolina. The article in https://www.unknowncountry.com/ reports on one loud boom that was heard in Myrtle Beach, SC on Dec. 14 of an unspecified year. The sound was so loud that it shook a window and the sofa that the person was sitting on, and she felt the shock from the sound. Thus, a loud enough boom can be felt.

In the Myrtle Beach case, the Air Force claimed responsibility and said that they had been conducting training exercises at the time. The seismologist whom I called in Virginia reported that, during the 1970's, Seneca guns were heard on the coast of Virginia. Reporters and seismologists investigated for several weeks but were unable to determine the cause. Finally the Navy admitted that one of their planes had caused a sonic boom. The problem with sonic booms is that they cannot explain Seneca guns that occurred before supersonic jets.

Naval ships firing their guns offshore might have produced some of the booms. Under certain atmospheric conditions, sounds can travel farther than usual so that they might be heard onshore as loud booms. Naval firing might explain some of the Seneca guns that occurred before jet planes were in wide use. In particular, naval gunfire might have caused some of the booms that were heard during the 1800's and early 1900's, when it might have been more common for ships to fire within a few miles of shore. However, naval gunfire cannot explain the Seneca guns inland, around Seneca Lake and Cayuga Lake. These lakes are much too small to have any military vessels on them, and no navigable rivers connect them to the ocean or to the Great Lakes.

Earthquakes are also a possible cause. In southeastern North Carolina, earthquake lists show seven events between 1871 and 1968. Each event was reported by people who felt it or heard it. The problem with the earthquake explanation is that something that is felt or heard that strongly should have been recorded on nearby seismographs (these are the instruments that record ground shaking for seismologists to analyze). A seismologist in Virginia who has tried, has never been able to match any of the reported Seneca guns with his seismograph records, and he has tried lots of times over the years. The article at https://www.farshores.org/ reports on a boom that occurred near Charleston, SC, sometime during the week before Aug. 2, 2003. Seismologists at Columbia, SC, and at Charleston examined their seismograph records and could find nothing at the time of the boom. It's particularly interesting that the seismologist in Charleston, where the boom was reported, did not find any record of an earthquake. The article does not mention any shaking. Of course, seismographs have only been widespread since the 1960s, and they were few and far between before then. We can't tell whether or not older Seneca guns would have been recorded by seismographs if the instruments existed then.

FORT FISHER, N.C. -- The sound rolls in off the ocean like an invisible tidal wave, washing over houses with enough force to rattle windows and startling people who look uneasily to the ground and to the sky for an explanation.

Boom. Rattle. Rattle boom. And it is over as quickly as it began.

The mysterious noises have been reported as far back as the 1850s.

Now, a Duke University seismologist hopes to find clues about the mystery sound's origins as a side benefit from an earthquake research project.

Peter Malin, a seismology professor for 10 years, plans to monitor a sensor that has been placed deep in the ground at the Fort Fisher State Historic Site near Wilmington.

The sensor is intended to record minor seismic activity that might indicate when more significant quakes can be expected.

There is no explanation for the sounds, at least not one on which everyone agrees.

Some say the rumbling is a sonic boom created by unseen aircraft. Others suggest top-secret military training offshore or maybe the earth moving on the ocean floor or deep below ground.

Then there are the theories that gave the phenomenon its name, the Seneca Guns -- that the sound comes from the ghosts of American Indians firing guns to disturb descendants of those who drove them from their land.

This name first arose in New York, then applied to North Carolina, even though there were no Seneca Indians there.

Malin's hunch is that the booming noise originates in the atmosphere, although he has no particular theory on the cause.

He heard the sound and saw its impact in July while preparing his project. Doors and windows shook, but the house didn't, he said, indicating to him that the ground did not move.

Residents who have heard the noise for years have ruled out obvious suspects such as thunder because the booms have occurred on clear days when there were no clouds or lightning.

Accounts of the rumbling date back to the days before airplanes, much less supersonic jets that fly fast enough to break the sound barrier.

There is no particular pattern, although in the past they have been reported most often in the fall and spring.

Other scientists have suggested that the interplay between water and weather might be causing the sounds.

Some people say that the mystery should never to solved, but Malin says that there is good scientific basis for his wanting to figure it out. 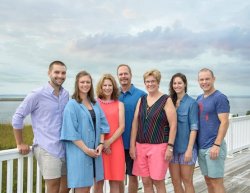