Everything you always wanted to know about the Hatteras Island spaceship.with video! By ANNE BOWERS

Some call it an eyesore but to the throngs of the curious who stop to stare, the silver spaceship is probably one of the most fascinating objects on Hatteras Island. To visitors driving through Frisco, it screams, "Greetings, earthlings!"

"I am told by the Dare County Tourist Bureau that it is the second most photographed thing on the island - next to the Cape Hatteras Lighthouse," says spaceship owner and captain, Jim Bagwell. "People really believe that there are aliens out there."

But, you probably don't have to believe in creatures from outer space to be amused by a silver spaceship sitting along a wooded stretch of road in an island community.

According to Bagwell, the Dare County Planning Department doesn't want this odd structure around because it doesn't match the island motif but the tourists just love it, even though it isn't covered in cedar shakes.

He bought the spaceship about 20 years ago from a couple in Hatteras village, who were the original owners. They bought and located the structure on the oceanside in the village 40 years ago and used it as their beach house retreat.

Bagwell moved it to Frisco to use as an attraction for business, as he put it "something to turn heads as people drove by." It has been in three different locations in Frisco -- across from and on the grounds of the Scotch Bonnet Marina and, currently, about a mile south of there. He has leased it as a flea market, an office, and even an "Out of this World" hotdog stand.

It is definitely a controversial piece of architecture, which is why he bought it.

For years, Bagwell and his daughter envisioned the cheeky spaceship as an ice cream stand because of the minimal requirements for water, bathrooms, and parking for this type of business. It has sat vacant for years because he hasn't been able to get the project "off the ground," so to speak.

"Apparently, everybody else can use it but me," complains Bagwell. He says that he has had five or six stop work-orders and that the Dare County Planning Department has denied all his requests to make alien ice cream. He is unable to get water or power approved for the spaceship. In fact, he says that the county wants him to tear down or at least hide it somewhere.

"The Planning Department hates me but the Tourism Board loves me!" he says.

His spaceship has been used as a backdrop in three bootleg movies, according to Bagwell. Well, now it is four movies.

As he remembers, a videographer from the Raleigh/Durham area contacted him about making a movie about his spaceship, something that has been a common request over the 20 years he has owned it.

A time was set and video-grapher Kim Best interviewed Bagwell and neighbors of the dilapidated spaceship to make, as he recalls, a film about the odd things she finds in North Carolina to be submitted into some sort of historical society. Her mission was to drive around North Carolina looking for strange things to video.

Best was thorough with her research and interviews about the alien-looking structure that sits cockeyed on a bed of rocks.

Bagwell says that he suggested to his neighbors that they agree to do an interview, that it would be a good way for them to air out their problems with the spaceship that has inconvenienced them for years as tourists use their yards for erratic turnarounds and parking.

He figured that nothing would ever come of it, just like all the other hundreds of calls he has had over the decades. It was a total surprise to the spaceship's owner that a video came out of the interview and that his alien-looking building now has a whole new existence in the You Tube world.

The video is very informative, entertaining, and makes the dilapidated silver spaceship look out of this world. It is 20 minutes long, but anyone who has ever wondered where in the world that spaceship came from will enjoy it. Link to video: www.youtube.com/watch?feature=player_embedded&v=H44jLsyPdjk 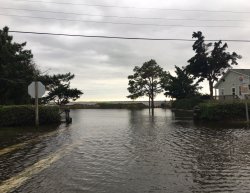