Lighthouses on the Outer Banks

When you mention lighthouses and Outer Banks of North Carolina many people immediately think of the Cape Hatteras Lighthouse which received a lot of publicity in 1999 when it was moved back from the oceanfront because of the threat of erosion. The lighthouse had stood on the same spot since 1870 and the move was a massive undertaking but very successful.  The structure was moved 2,900 feet from the original location. It is the tallest brick structure ever moved.  Both the Cape Hatteras and Bodie (pronounced Body) Island Lighthouse were built in the 1870s to warn ships along the Outer Banks of the dangerous shoals while the Ocracoke Lighthouse, built in 1823, was built to mark Ocracoke Inlet and Silver Lake. The Ocracoke Lighthouse is the oldest operating lighhouse in North Carolina. More on that in another post.

While construction of the lighthouse at Cape Hatteras was authorized by Congress in 1794 construction was not started until 1799.  It was first lit in October of 1803 and was made of sandstone, stood 90 feet tall.  The lamp was powered by whale oil.

When planning your visit to see this particular lighthouse keep in mind that the climb to the top is very strenuous. There are 257 steps from the ground to the watch-room. That is equal to climbing a 12 story building. There is a landing every 31 steps and a handrail on one side only. No air-conditioning, so it gets humid and hot during the summer months.

Each year during our photo contest the lighthouse is one of the most popular submissions, and you can see some of the entries here along with some photos from NPS.gov. Some of these photos are from 1893 and show the lighthouse in the original location.

I bet you didn't realize that the beaches along the Cape Hatteras sparkle at night.  Next time you take a beach walk while it is dark, kick some sand. Doing so disturbs gtiny dinoflagellagtes and a chemical reaction makes them glow with a blue-green light.

Cape Hatteras National Seashore was the nation's first national seashore and supports quite a diverse group of animals and plant life. The Pational Park Service maintains the lighthouse and the keepers quarters while the Coast Guard maintains the automated light. 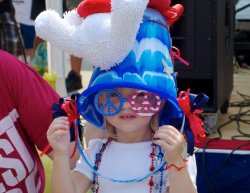