For the third time in three years, Jennette’s Pier in Nags Head has been recognized for operating a “green” facility.

Tom Rhodes, manager of the NC GreenTravel Initiative, recently appointed the pier as an official member of the program. He also awarded the pier an official certificate of recognition to call attention to the designation.

The NC GreenTravel Initiative is a free program of the North Carolina Division of Environmental Assistance and Customer Service to help promote robust economic growth and environmental stewardship in the travel and hospitality sector through the recognition of "green" travel-oriented businesses.

It is partnered with the Center for Sustainable Tourism at East Carolina University, the N.C. Division of Tourism, Film & Sports Development and Waste Reduction Partners and is based out of Greenville and Raleigh.

“Jennette’s Pier is entitled to display the NC GreenTravel door decals and certificate of recognition to call attention to the fact you care about our environment by operating a sustainable attraction,” he said.

Pier Director Mike Remige was thrilled with the designation and he said the pier hopes to add more green features such as additional photo-voltaic solar panels and using the geothermal system to keep the pier’s aquariums cool.

Earlier in 2013, the pier’s Earth Day event, “Earth Fair OBX,” was recognized as an official expo site of the N.C. Science Festival. Seasonal educator Lydia Courtright won a DENR Sustainability Award, Second Place Individual, for her efforts in launching the first ever Earth Fair OBX in 2012.

Jennette’s most significant award came in 2012 when it received Platinum level LEED Certification from the U.S. Green Building Council. LEED stands for Leadership in Energy and Environmental Design and is a globally recognized symbol of excellence in green buildings.

Both the NC Green Travel and the Platinum plaques can be seen inside the pier house. Jennette’s Pier is owned and operated by the North Carolina Aquariums, a Division of the State Department of Environment and Natural Resources. 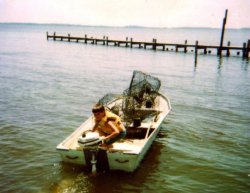 Meet the Owners of "I Got Your Crabs" in Kitty Hawk, NC